​​​an Innovative Molecule against CORONAVIRUSES

The molecule serves to protect surfaces in an innovative way, killing all bacteria and viruses already present or subsequently deposited on the surfaces themselves. Protection is also active against viruses belonging to the Coronavirus family. 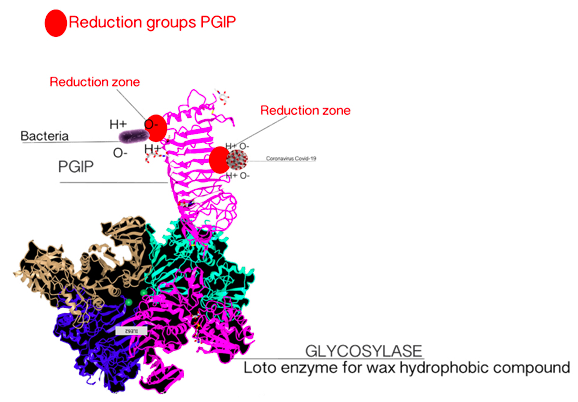 That proteins protect plants from fungal, viral and bacterial invasion. They interact with inner several proteins belonging to the cytoplasm environment, PGIP’s are class of proteins specialized for protein-protein response especially with endo-poly-galacturonases or other enzymes causing a PGIP and microorganism interactions with the cell wall of plants.

By means of inhibition of the enzymatic action deriving from microorganism, and the possibility to accumulate many PGIP’s in the site of injury plant organize their defense.

The extra-cytoplasmic type PGIP’s another class of these proteins are homologous to the previous cited, plays a crucial role in development, of a kind of defense that could be used by cloning, the biotech field.

The PGIP structure is characterized by the presence of two receptor kinases in and reveals a negatively charged surface on inserts on the LRR (leucine rich region) at the concave face, likely involved in binding external substances.

Thanks to a negative pocket corresponding the LRR, we observe a hydrophobic region including two receptors capable to reduce everything is in touch by the action of an oxidoreductase reaction.

The majority of microorganism, bacteria fungi and virus need to have a breach in epithelial barrier to gain access to tissues producing damages. Using PGIP’s by cloning this is avoid only when PIGIP is in touch of microorganism.

Nelumbo nucifera is the scientific name of the lotus plant, the leaves of this vegetal are coated by a special type of wax, a tetrameric glycoprotein with four hydrophobic regions responsible of the  so called “lotus effect”.

By lotus effect [2] we mean a property of the leaves and flowers of Nelumbo nucifera: they are highly super hydrophobicity, so much so that everything is slippery.

Using a molecular biology technique, by a bait protein  expressed as a fusion using To make a GAL4 DNA-BD/bait construct,  by pGBKT7,plasmid. the fusion result, it’s the innovation.

Experimental tests were conducted during 3 years and led to convincing results: any time a mould or a gram-positive bacteria - which is significantly more resistant than a virus -  got in contact with leucine’s reduction region, it was successfully destroyed. Experiments’ repetitions showed that each molecule can neutralise up to 4 microorganisms, proving the highly effective prevention action.

Delphinus Biotech is an innovative Italian start-up that has developed a long-lasting antiviral molecule called Bellerofast(*). Research and development have been carried out entirely in Italy by Italian researchers in the past eight months.

The molecule serves to protect surfaces in an innovative way, killing all bacteria and viruses already present or subsequently deposited on the surfaces themselves. Protection is also active against viruses belonging to the Coronavirus family.

A disinfectant has the function of killing the virus when the latter is already present on the surface. Alcohol or chlorine-based disinfectants, that is, those commonly used, have the limitation of lasting only a few hours on surfaces which, after the product has evaporated, remain exposed to viral attacks.

Bellerofast(*) is not only a disinfectant molecule but a virus neutralizer that works through a principle called a biological trap. Bellerofast(*) immediately neutralizes the viruses present, but has been designed for a duration of several days.

When the viruses come into contact with the Bellerofast(*) molecule sprayed on the surface, they are instantly eliminated and the protection lasts for several days. For example, Coronavirus Sars-Cov2 can remain active for up to 9 days on surfaces that cannot be treated constantly and continuously.

Bellerofast(*) was designed to protect touch surfaces which are a vehicle for the transmission of viruses, such as house handles, large shopping center grab bars, shopping trolleys, seats for public transport but also screens mobile phones, wallets, computer keyboards, as well as shoes and clothes. The molecule is suitable for use on large surfaces, i.e. sprayed on roads, floors and walls, in order to neutralize viruses quickly and effectively, thus creating a protected and safe environment.

Bellerofast(*) is a fusion molecule that comes from the combination of genes of plant origin, absolutely non-toxic for the human body, and can also be used to protect the hands from attack by viruses and bacteria. It is transparent, odorless, colorless and harmless in case of involuntary ingestion.

Delphinus Biotech intends to be an active part in the fight against Coronavirus, therefore it will grant the Italian government the production license until the end of the national health emergency.

Delphinus Biotech will give full support to the technicians of the Italian Government in order to be effective, fast and efficient in the production, distribution and use of the product deriving from the new Bellerofast(*) molecule.

Any cookies that may not be particularly necessary for the website to function and is used specifically to collect user personal data via analytics, ads, other embedded contents are termed as non-necessary cookies. It is mandatory to procure user consent prior to running these cookies on your website.